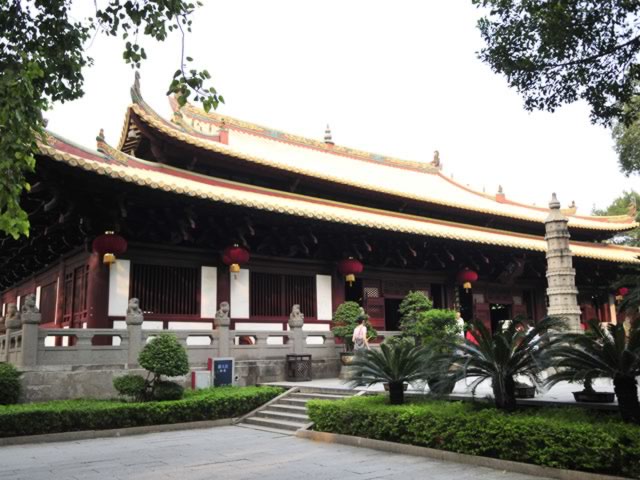 Guangxiao Temple, the oldest temple& one of the four most famed temples in Guangzhou, is a big charm to Buddhists and history enthusiasts with a well-know description “Guangxiao Temple comes earlier than Guangzhou”. Long as a 1,700-year history the temple has been through, the majority of the temple compound are luckily in good preservation, showing their time-honor aesthetic value within an occupied area of 31,000 square meters. In addition to the halls, Buddhist sculptures, pagodas and censers, even the trees in the temple are able to independently tell what have been classic anecdotes in Chinese Buddhism communication history. Intensely linked to a great monk who was respected as the leader of Zen Buddhism in South China, Huineng, Guangxiao Temple seems to provide more insight into the development of such an important school in China Buddhism.

The Mahavira hall (main hall) serves as the earliest statement of the grandeur and grace of the temple. During the ancient Eastern Jin Dynasty (317-420) the hall was built. In a motherly manner, it silently watched the following establishment of other buildings, however, its privilege of receiving admiration from visitors has ever beyond doubt. For architectural fans, the hall is worthy of their exploration. The amusing difference between the hall and those of other temples lies in the left-open wall between the double roofs. Such a design is seemingly meant to let in more air and sunlight, but it actually helps stand the hall in good stead. Three golden Buddhist statues with average height of 27 feets, look extraordinary magnificent and convincing to those who come to pray for happiness and career take-off. Usually the three statues enjoy larger number of kneeling prayers than other statues, like Sleeping Buddha and Thai Buddha set in the side halls of the temple.


Behind the huge Mahavira hall there are three pagodas and another hall standing for centuries. Both iron pagodas are known as the oldest biggest iron pagodas in existence in China with the one on the east side well maintained. Examined closely, the Eastern Iron Pagoda is a marvelous mass carved Buddha statues, making it hard to believe that so sophisticated a pagoda should be completed in as early as the year 967, period of Southern Han State(917-971). The Six Ancestor Hall (Liuzutang in Chinese) and another pagoda called Pagoda of the Sixth Ancestor’s Sacred Hair (Yifata in Chinese) are reminders of the immortal Zen Buddhism master Monk Huineng. Huineng received tonsure in 676 during Tang Dynasty and the seven-storey pagoda became the spot where Huineng buried his hair, wave goodbye to his earlier worldly life and stood as the sixth patriarch of Zen Buddhism from then on.