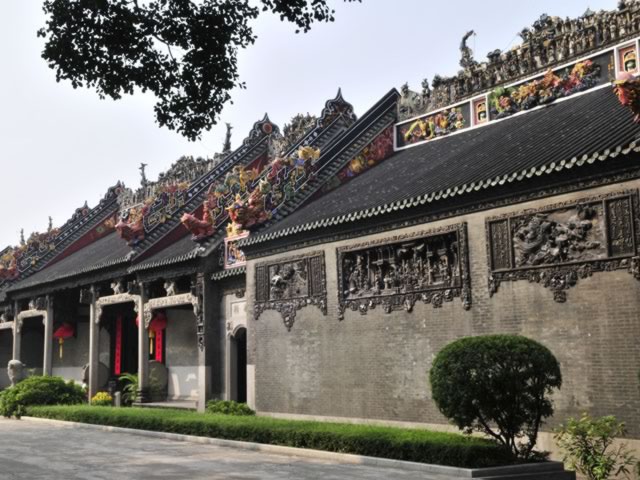 The Chen Clan Academy (Ancestral Temple of the Chen Clan) was built in the year 1888 as by the Chen families, serving as the hall for ancestor worship as well as a temporary residence for the juniors’ study and preparation for the imperial examination. The complex itself is a highly valuable traditional building representing the traditional Cantonese architectures and folk arts, and in 1959, on the base of the Chen Clan Academy, the Guangdong Folk Arts Museum was established for collection, study and display of folk arts throughout the country.


The Chen Clan Academyis the largest, best-preserved traditional building with most brilliant decorations in Guangdong Province. Covering a total area of 15,000 square meters, the Chen Clan Academy consists of 19 buildings with 9 halls and 6 courtyards, arranged symmetrically on both sides of the north-south central axis. The most highlights are the carvings (wood, brick or stone), sculptures (ceramic or lime), iron castings, paintings and embroidery whether in a topic of legendary figures, auspicious flowers or animals, or telling a story from the history. All of these display the exquisite folk arts and handicrafts of the locals.

Juxian Hall is located at the center of the Academy, once serving as the gathering place of the Chen’s Clans for important events and now an ancestral hall. An exquisitely carved folding screen in the hall is an excellent example of woodcarving.